Classics Never Go Out of Style

The Illustrated Man by Ray Bradbury

I would love to see this tattooed man!  The descriptions sounds so amazing.  With the popularity of tattoos today, I can say, once again, that Bradbury was a literary visionary.

What a genius idea for a collection of short stories.  A man wanders out of the woods one day.  He is completely covered in beautiful, brilliant tattoos.  As the narrator looks at him, each tattoo starts moving, coming to life and telling a story.

Bradbury is a master of science fiction and the stories in this collection range from terror-filled to tragic to just plain weird.  The 18 short stories do not have interconnecting scenes or characters but are only connected through the skin of the tattooed man.  My favorite story was the first one called "The Veldt".  It's about a family who has two kids who watch too much of their 3D TV.  When the parents try to discipline the kids and take their TV away, the children retaliate by turning the channel to an African veldt with hungry lions ad locking their parents in the room.  Some stories were so tragically awful.  "Kaleidoscope" was about a group of astronauts hurtling through space with no change of rescue.  "The Last Night of the World" is where a couple discover this one night is their last on Earth.  How would you spend your last moments? Not like them, that's for sure!  I also really like "The Exiles.  Any story with Edgar Allen Poe and other famous classic authors as main characters is the story for me!

Bradbury, always in fashion--no matter the decade!
Posted by CC Thomas at 8:50 PM No comments:

Email ThisBlogThis!Share to TwitterShare to FacebookShare to Pinterest
Labels: The Illustrated Man 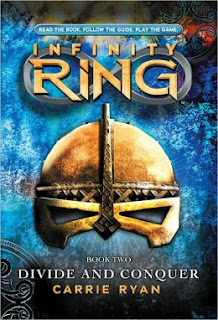 So,  I like to think I know a lot about history.  I'm a bit of a fanatic, really.  I read all I can.  I go to museums.  I watch documentaries.  You might even say I'm a history buff.  I could probably run the category dry on Jeopardy.  But I didn't really see what was wrong with the history in this book!  And, isn't that kind of the point of this series?  If I can't figure it out, an adolescent surely isn't going to-unless he or she is a serious history lover of archaic French battles.

Dak, Sera and Riqu are still racing around in time.  Dak is trying to fin his parents, who are lost in time.  Sera and Riq are still trying to fix some time 'mistakes' that have been hi-jacked and possibly have something to do with their own messed up memories.  This time, the three are in medieval Paris and are supposed to stop a Viking invasion.

My favorite part of this story was the addition of a giant dog (wolf hound or Pyrenees?) to the crew.  A Viking dog who becomes attached to Dak--that should make things more fun.  I hope it's a permanent addition.

The farther this series goes, the more lost it gets.  That's a shame because I really love this author.  For all that, I did like the plot better in this one than the first.  The book is marked as 'transmedia'.  I believe there is some type of website and game that goes with the book.  While that isn't my cup of tea, I am wondering if that might improve the story.
Posted by CC Thomas at 4:31 PM No comments:

The Best One Yet

F is for Fugitive:  Kinsey Milhone #6 by Sue Grafton

This book is the best one to date!  I hope that trend continues with the series.  If I use alphabetic math (the only kind of math I know), the series should get 20x better by  the last one.  Z is for ?  What in the world will Grafton think of?

Kinsey Milhone usually sticks close to home for her cases, but since her apartment is still under renovation (someone blew it up trying to kill her) and her office is closed (someone tried to frame her for fraud and murder), Kinsey decides to take a working vacation at the beach.  Kinsey is hired to solve a 20-year old murder case of a local teenager.  The hotel's owner is a dying man and wants to see his son's name cleared of the crime.

The 'F' for fugitive is for Bailey, the rumored teen-turned-murderer, now escaped and on the loose and communicating only with Kinsey, who is desperately working to figure out  a decades old crime.

Grafton's description of the setting in this book, the hotel, was spot on.  I can picture it, so similar to a cheesy and damp Daytona Beach hotel we stayed in last summer.  A cold wetness just kept seeping between my toes and I couldn't wipe it off; the sand irritating in my shoes.  Everything was damp and decaying-a slow death and Grafton captured it perfectly.

This one is  a little different from some of Kinsey's other books.  This one was filled with a lot of sadness.  Is it because the murdered girl was so young?  The reader really gets to see how the murder affects the families of everyone involved, including the murderer himself.  You don't have to read the books in order but it helps with the subplots of the minor characters.  And, since it's ABC, it isn't really too hard to keep track of which ones you've read.
Posted by CC Thomas at 7:34 PM No comments:

Email ThisBlogThis!Share to TwitterShare to FacebookShare to Pinterest
Labels: F is For Fugitive

WWII from a Dog Lover's Perspective 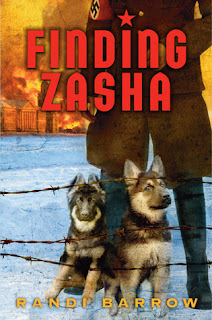 It's hard to tell if you should read this one first or not.  It's a prequel to Saving Zasha, although Zasha also gets saved in this one.  Troublesome dog, but worth it.

The story takes place during WWII in Russia.  It is a unique perspective of the war as the cities were essentially frozen by the war and the weather--cities left to fend for themselves for the creature comforts of warmth and food as nothing can get past the front lines and nobody is allowed to leave.  Ivan,the main character, and his friend are forced to leave Leningrad when his mother is sent to work in a factory.  The trip is arduous and dangerous and they arrive to find their new village home is being taken over by Nazis.

The German officer in charge inspects the town with his two German shepherd puppies, killers-in-training to hunt down the enemy.  Ivan decides how he can fight the Nazis in his own small way.  I loved this aspect of the story-one person making a difference in the world!  Ivan wants to train the puppies to NOT kill, but to be just regular dogs.

Personally, I think the hero of the book was the little old lady neighbor.  She hides money and food in hollowed out places in her apartment and furniture, shares her last bit of food with her neighbors, and risks her life to take Ivan across the country on an ice road to her sister-in-law's house.  That's chutzpah!

Mostly, I found the story to be kind of slow and boring and parts of it a bit cliche.
Posted by CC Thomas at 5:00 PM No comments: