Humanity and Its Best and Worst

The Postman by David Brin 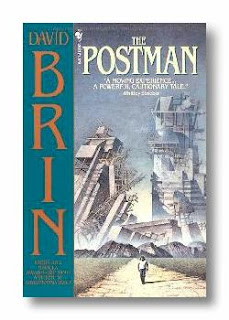 I really love the dystopian genre.  Not because of the darkness and chaos that is so prevalent, but because I love to see how humans retain such incredible sparks of humanity in the face of eternal darkness and destruction.  The Postman is a perfect example of that and one of the better dystopian books I've read.

Gordon is a trader and scavenger--barely living by his wits until he comes across the remains of a postman in an abandoned vehicle.  He takes the postman's clothes and gear, never knowing how such a simple act of survival will change his life and his world.  As he wanders into villages and towns, Gordon (as the postman) becomes a symbol to people of what they lost with the destruction of their society through war and disease.  Almost accidentally, Gordon starts the US postal service and begins to connect peoples and towns with simple acts of social letters.  Of course, there are those who don't want him to succeed and the last half of the book is an adventure worthy of any action movie.

My only wish with the book was that the female guerilla fighters had been given more time and attention to.  Or, since I'm wishing anyway, their own book!
Posted by CC Thomas at 2:57 PM

Email ThisBlogThis!Share to TwitterShare to FacebookShare to Pinterest
Labels: The Postman