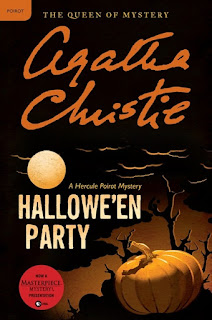 One (out of many) of the things I love about Christie is that it isn't necessary to read her books in order.  Serial mysteries become tiresome as one scrambles about trying to figure out which to read next and getting angry when one has read the wrong book out of sequence.  Christie's books aren't like that and it's a pleasure finding them in garage sales or old book sales and buying them without a thought of whether it comes next or not.

This one is actually the first I've seen which relied one a book previous, although the references weren't really important.  In this book, Poirot has been called in to investigate the death of a child during a Hallowe'en party.  The child was forcibly drowned in an apple-bobbing bucket during a busy party, but no one can figure out the who might have done it.  Poirot's investigation unveils some very unpleasant skeletons in a few family closets and there are soon many suspects.  Don't think you'll guess the secret, though!  Unless you're as clever as Poirot (or Christie), you'll be guessing right up to the last page.
Posted by CC Thomas at 3:27 PM